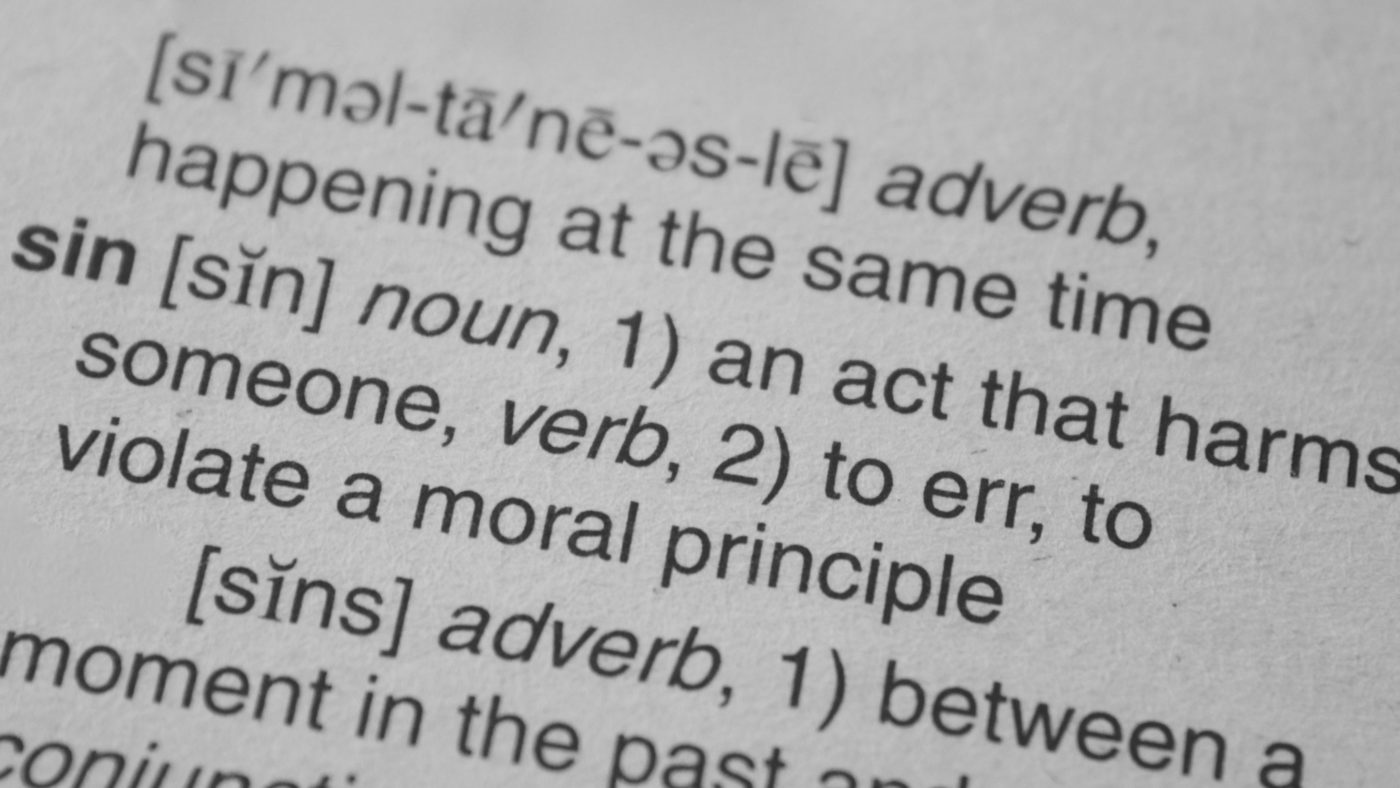 A New Vocabulary is Changing the Way Christians View Homosexuality. Should We Adopt It?
(Part One of a Three-Part Series)

The man approached me right after I finished speaking to the conference on purity, gripping my hand. “I love every point you made,” he enthused, “and I know all about striving for purity. I’m a Boy Lover.”

Totally confused, I asked him to clarify.

“I love boys. I’m attracted to them. But I’m a Christian, so I’m celibate,
of course.”

That began a long debate over how and why we choose certain words to identify ourselves, under what circumstances we should adopt labels, and whether or not it’s ever right to use positive words when referring to
sinful tendencies.

“Everybody’s Talkin’ at Me”
A broader debate grows and even rages over the terms we use for homosexual people, and for homosexuality itself. Clearly the two issues – homosexuality and pedophilia – are entirely different, and no reasonable person would assume that just because someone is attracted to the same sex, he must be attracted to children as well.

But it’s the question of labeling sinful attractions (or our susceptibility to them) and then identifying ourselves by such labels, that we’re currently wrestling with. This isn’t a wrestling match between Christians and non-Christians, or even between conservative versus liberal believers. It’s between people identifying as Bible-believing, theological conservatives sharing an orthodox position on marriage and sexuality, but differing over which terms are proper to use when referring to people who struggle to live in obedience to those positions.

Traditionally they’ve been referred to as “Ex-gays”, “People who Struggle with Same-Sex Attractions”, or even “Repentant Homosexuals.” Today, a growing number of influential Evangelical voices are calling them “Gay Christians”, “Gay and Celibate Christians”, “Queer Christians”, or “Sexual Minorities.”

There’s pushback, to be sure, and never has that pushback been louder than in these past few weeks leading up to the well-publicized, controversial Revoice conference held last week in St. Louis.

Revoicing Our Terms
The controversy begins with the conference’s statement of purpose:

“Supporting, encouraging, and empowering gay, lesbian, same-sex-attracted, and other LGBT Christians so they can flourish while observing the historic, Christian doctrine of marriage and sexuality.”

Few Christians would object to a conference helping believers who are homosexually tempted to resist those temptations, build solid relations with other Christians within the church, and live godly, fruitful lives.

Well, after reading their materials and listening to some of the messages from the conference itself, it seems to me that those are the very goals Revoice was advocating.

That’s why it seems to me that their terms, more than their goals, present the most glaring problems for many people, myself included.

Five of those terms – Gay Christian, Mixed Orientation Marriage, Spiritual Friendship, Side B Christian, and Sexual Minority – seem especially problematic to me. So in this 3-part series, I’d like to spell out my concerns about each of them. These concerns, I should add, are shared by a number of people who reacted strongly and publicly to the event.

I should also add that those of us speaking out on homosexuality, transgenderism, and related topics (whether for or against the Revoice approach) hope to be heard by the Church at large. In that sense, I guess we’re competing for the Bride’s ear, hoping she’ll say “yes” to the positions we promote, though I doubt any of us see ourselves as literal competitors.

So the best any of us can do, as I’ll try to do here, is present our case in as Biblical, clear, and fair a manner as we can. It will be up to our readers and listeners to determine whose position is the soundest.

Gay Christian?
Usually, the term’s been applied to people who believe homosexuality and Christianity are compatible, promoting a revised view of the Bible and claiming God blesses same-sex coupling.

Today, though, +it’s also being applied to people who are attracted to the same-sex but refuse, out of obedience to God, to express those attractions. Popular Christian authors like Wesley Hill , Nate Collins , Preston Sprinkle , Gregory Coles and Ron Belgau are among those who express or support this application.

To a point, it’s an application which makes sense, because in this age of recovery-oriented identities, people adopt labels describing problems. (“My name’s Barbara; I’m an alcoholic.” “My name’s Lee; I’m a sex addict.”)

Unquestionably, there’s value in being honest about an area of weakness, so James tells us to confess our faults one to another (James 5:16), and Paul declared he kept a close watch on himself to avoid anything that might compromise his calling (1 Corinthians 9:27). But is it wise (much less, biblical) to categorize ourselves by a sinful tendency? Under what circumstances should we acknowledge those tendencies? And should the terms we apply to them ever be positive?

Nowhere are these questions more relevant to the modern church than in the area of sexuality. As the culture shifts toward condoning behaviors it once condemned, so does its language. Polygamy has been rechristened “polyamory,” a promiscuous male is now “a player” or “a stud,” and sex-change operations have morphed into “gender confirmation surgery.” We may frown on society re-framing immorality in positive terms, but when believers do the same, we do more than frown. We fear.

In fairness, we should note that some who identify as gay Christians hold an essentially sound position on homosexuality. They accept biblical condemnations of same-sex behavior at face value, so they abstain from it. Obedience is no small matter to them, and they should be given due credit for accepting the role self-denial plays in the life of any serious Christian.

We part company, though, over the area of self-identification. When I repented of homosexual behavior in January of 1984, the homosexual orientation—an internal sexual attraction toward men—was something I couldn’t repent of, because as an involuntary condition it didn’t have an “off” switch. Those attractions would continue to arise, and when they did, I needed to resist them. In the interest of doing so, and in making a clean break with my identity as a gay man, I moved to another county, found a church, hired a professional counselor, and began investing in daily prayer, Bible study, regular worship with other believers, and deep friendships.

Yet I never considered myself a gay Christian during that transitional time, despite any lingering homosexual attractions I had. I was aware of the attractions, dealing with them as they arose, but they no longer defined me.

That put me in the same boat as any new creature in Christ. Scripture calls us to an awareness of the sin nature (Romans 6–7), the temptations and responses it generates (Galatians 5:17), the mandate to resist (Romans 6:12), the promise of strength to do so (1 Corinthians 10:13), and the “glory to glory” transformative sanctification we experience (2 Corinthians 3:18). We can thereby, with integrity, wear the “sinner” badge, as Paul did (1 Timothy 1:15), recognizing we always fall short (James 3:2) and, in this life, always will be both wrestling with and overcoming sinful impulses.

All of this can be done without labeling ourselves by impulses we’re overcoming. In limited situations—a support group for people wrestling with a life-dominating problem like addiction, for example—it makes sense to specify the problem. (James’s instruction cited earlier to “confess our faults” comes to mind here, an instruction we hardly can obey if we’re not honest about the faults themselves.)

So the statement, “I’m Bob, and I’m an alcoholic,” has merit when Bob’s in a meeting focusing on alcoholism. When Bob’s in church, one hopes he wouldn’t feel compelled to introduce himself the same way. After all, if I have Type-A blood, that’s relevant when I’m in the hospital; irrelevant most other places. It’s no dark secret, of course, since everyone assumes I have blood. But the specific type hardly matters.

Likewise, within the body of Christ, we’re all wrestling with some kind of sinful tendency. We assume that about each other without knowing, or needing to know, the actual temptations of someone next to us in the pew. The fact we’re sinners is no dark secret; we all struggle, we all know it. That “something” may be a common tendency or an uncommon one, one we all share, or one only a few of us can relate to. The general struggle is universal; the specific type hardly matters.

Calling the Bad the Good
But when it does matter—when a Christian who experiences same-sex desires chooses for whatever reason to acknowledge them—the way they’re acknowledged matters as well. That, too, is where the term gay Christian
is problematic.

On the one hand, an area of weakness is no cause for shame, since we all experience cravings for what we know to be wrong, desires in conflict with our beliefs but strong and persistent regardless. By and large, while we do pay attention to them, we don’t beat ourselves up over them.

But we don’t refer to them with flattering lingo, either. We don’t call them gay, which implies they’re happy, cheerful things. Nor do we consider them morally neutral as we would consider our nationality or our sex. They’re neither good nor neutral, but regrettable, a reality of life in this fallen world from which we look forward to being finally and permanently freed when our mortal bodies put on immortality, and sin is once and forever swallowed up (1 Corinthians 15:53–54).

The term “Gay Christian” labels when labelling seems uncalled for. Having dealt with the issue myself, and having had the privilege of walking alongside many Christian men and women who have done the same, I’m more convinced than ever that homosexual is a word best used as an adjective (“I experience homosexual temptations”) rather than a noun (“I am a homosexual”). The result of the latter usage is labeling and limitation. The former offers a broader, more biblical self-view.

This is why the words of one Christian woman dealing with her own homosexuality are so apt:

I found for myself that moving past gay identity was essential for living stably and contentedly according to my beliefs as a same-sex attracted Christian woman.…Abandoning gay identity doesn’t mean being in denial. It doesn’t mean “naming it and claiming it,” proclaiming that you’re “healed,” that you’re totally straight and happily heterosexual, while you’re still homosexually attracted. What it means is radically altering the role that the fact of your homosexual attractions plays in your thinking about yourself and your life.

Whatever our unique struggles, we could do worse than to take a cue from her, remembering that the way we frame our experience directs our response to it:

Thank you so much for this wonderful contribution from the perspective of someone who has bee there. I agree with you that the language is so important in how we frame these issues and ultimately see ourselves.

My one question was regarding attractions being something you don’t “repent” of but instead “resist”. Could you unpack that a little? I’ve struggled to get my mind around this part of the debate.